The magnificent Batu Caves are one of the top tourist attractions in Malaysia, partly because they are located only 13km from downtown Kuala Lumpur and easy to get to.

There are 4 main attractions at Batu Caves which is a limestone hill riddled with caves. These attractions are Temple Cave (or Cathedral Cave), Dark Cave, Cave Villa and Ramayana Cave 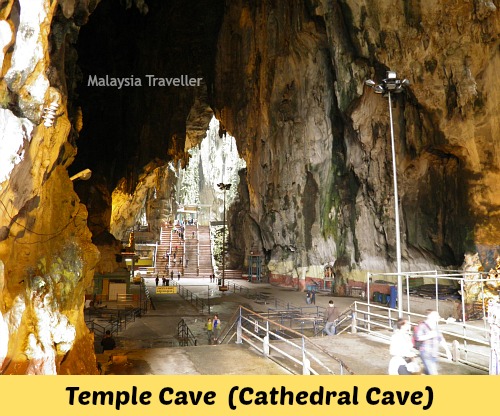 The main Cave is known as the Temple Cave or Cathedral Cave and is accessed by a steep flight of 272 steps.

The top of the stairs brings you into a massive cave with a high vaulted ceiling. The cave serves as a Hindu Temple devoted to Lord Muragan whose 42 meter high gold statue stands guard outside.

There is no entry fee for visiting the Temple Cave although you may leave a donation in one of the collection boxes if you wish. 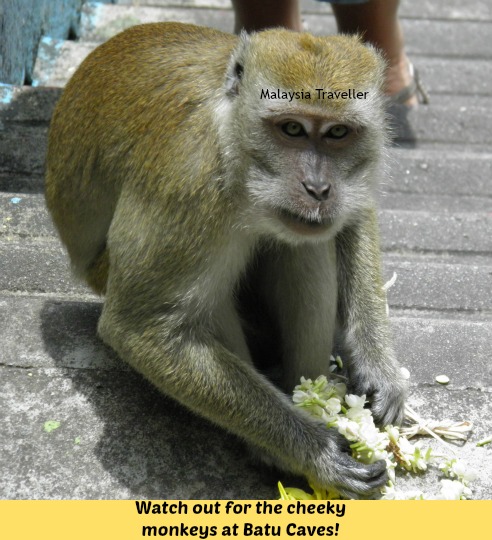 The steps are thronged with troupes of greedy macaques who will harass you for food if you are carrying any (better not to feed them). 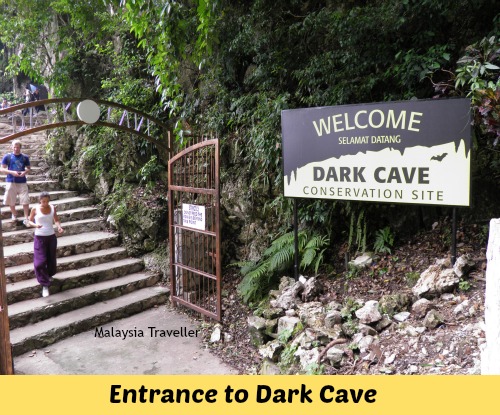 Half way up the flight of stairs is the entrance to the second main attraction, the Dark Cave. This is more of an adventure cave with educational and scientific interest.

It is not always open (on 2 of my 7 visits to the Caves it has been closed) and depends on the availability of a guide without whom you are not allowed to enter.

The Dark Cave is said to be home to the rarest spider in the world, the Trapdoor Spider, and an ancient animal community dating back over 100 million years (which during my visit seemed only to comprise bats and cockroaches!).

Part of the Dark Cave complex is off-limits and preserved as a conservation site. 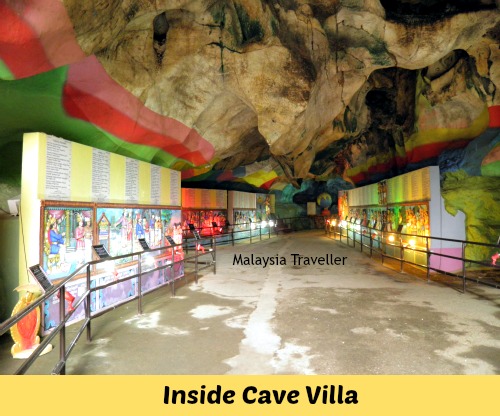 If you cannot manage to climb the 272 steps and if the Dark Cave sounds too creepy you can instead visit the 3rd main attraction, the Cave Villa which lies at the foot of the limestone hill.

You have to pay an entrance fee (RM15 for foreigners, RM7 for Malaysian residents) and cross a crooked bridge over a carp pool. Here there are two more show caves illuminated with coloured lights and containing brightly painted statues and paintings of Indian poets and characters from Hindu mythology. You can read the plaques containing pearls of oriental wisdom while strolling around the humid caves. One of the caves also contains glass display tanks full of snakes and other reptiles. I have heard that they now also have rabbits and racoons in small cages which some visitors may find repugnant. 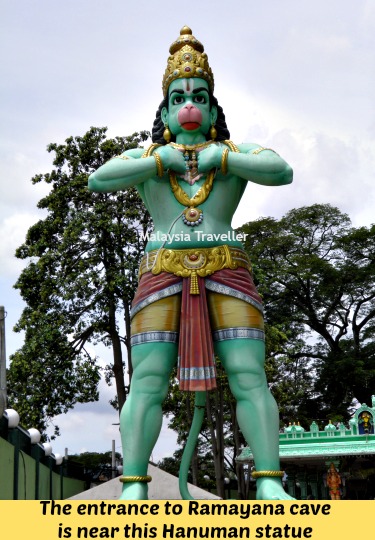 The 4th attraction is Ramayana Cave. This cave is located on the left side when you are facing the hill close to a 15 metre high green statue of Hanuman, the monkey god.. It is decorated with statues and scenes from the Hindu epic, Ramayana. Each time I go, I find fancier display and more colourful lights so that it now resembles a kind of Hindu theme park. Definitely worth seeing. There is a separate fee of RM 5 to visit this cave. 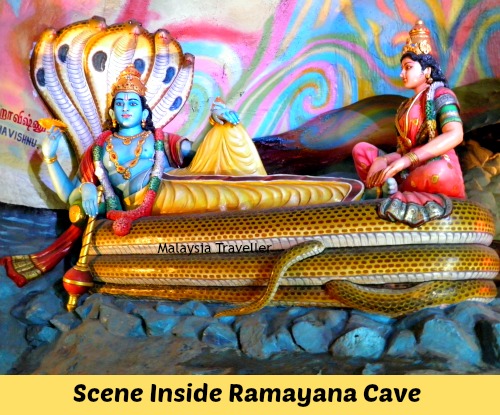 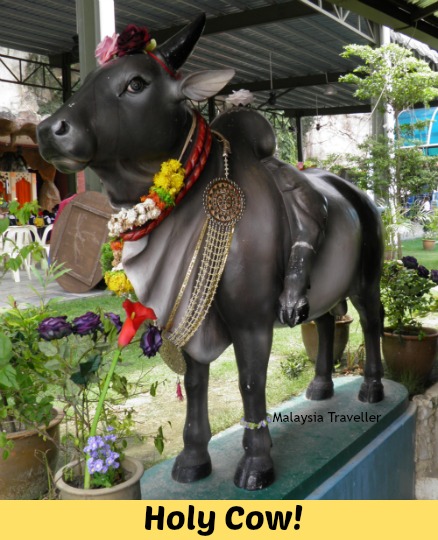 In the courtyard outside the caves you can see a statue of a five legged bull (with an extra leg growing out of its back) which used to roam freely in the temple grounds until its death from old age.

How to Get to Batu Caves

On my last visit I took the KTM Komuter train from KL Sentral all the way to Batu Caves Komuter station which is located a few steps from the entrance to the attractions. The fare in August 2017 was only RM2.60 each way (for those paying with cash and RM2.30 if you pay with Touch’n Go), which makes it the cheapest and easiest way to travel. The train has ladies-only coaches for the comfort and safety of female passengers. If you take your own car there is ample parking once you have negotiated the confusing road layout and reached the entrance to the cave complex. 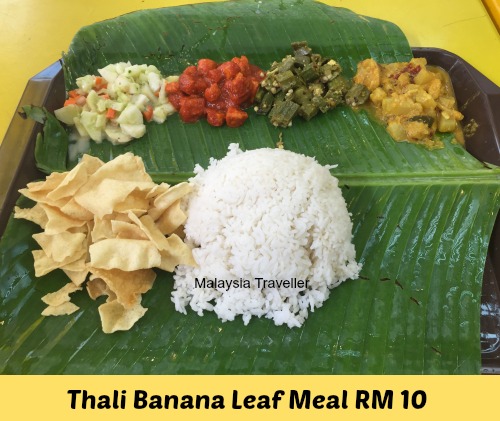 There are a few restaurants (vegetarian only being a Hindu Temple) where you can get a tasty Indian curry of 4 veggie dishes, rice and poppadums served on a banana leaf, together with a fresh coconut juice for around RM9. (Those prices were a couple of years ago – probably increased now given Malaysia’s high inflation rate.) Update AUG 17: the prices have gone up. Now it costs RM 10 for the food and RM 5 for the coconut. Still pretty reasonable! 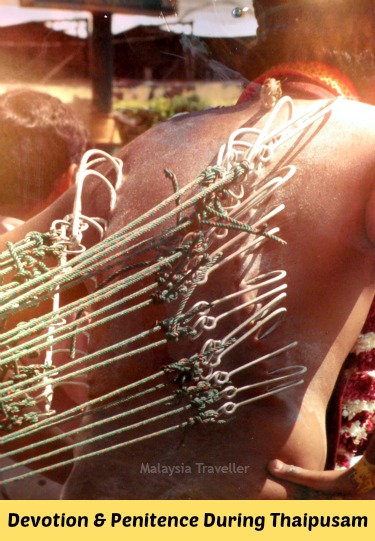 During the Thaipusam festival (which falls in January or February each year) hundreds of thousands of believers will throng to the cave, including a number who impale themselves with skewers and hooks as acts of penitence and devotion. Unless you are particularly fond of huge crowds or wish to take part in the festival, you might want to avoid visiting Batu Caves at this time.

Open Daily 7am to 8pm